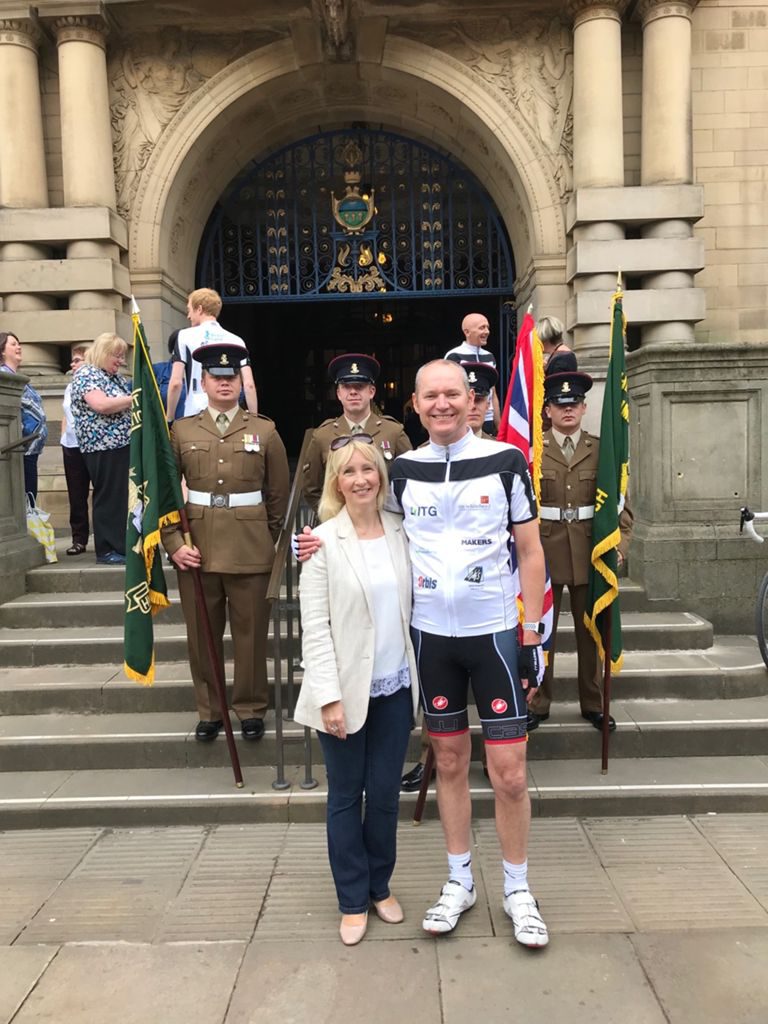 Earlier this year, Road Marking Services were proud to offer our support one of our valued clients as they took on the monumental challenge of cycling in the Sheffield to the Somme charity bike ride.

The four-day ride from Sheffield to Bapaume, France, was a major success, and we’re taking some time to highlight the campaign in our blog.

What was the bike ride for?

The bike ride was organised to raise money to improve the Sheffield Memorial Park – which is dedicated to the Sheffield Pals – a local battalion of Sheffield soldiers, most of whom were killed on 1st July 1916, the opening day of the Battle of the Somme. With a lofty goal of £20,000 for the combined campaign – which consisted of 20 riders – this emotional journey is one that is strongly connected to the Sheffield community.

Who did we sponsor?

We were proud to sponsor Gary Wright – Property Services Director at Meadowhall. Covering 322 miles – and travelling through four countries in four days – Gary and his team  raised over £3,000 for the cause, which will help to restore and maintain the memorial to ensure that future generations can pay their respects, and remember those who were lost long into the future.

Who were the Sheffield Pals?

In World War I, a ‘Pals’ battalion referred to groups of soldiers who enlisted together during local recruitment drives. The Sheffield Pals are the Sheffield arm of this drive, and for this particular regiment, The Battle of the Somme was particularly devastating.

A charity bike ride, such as the one completed by Gary and the team, is a powerful way to commemorate the sacrifice made by the brave soldiers of The First World War. But Gary’s journey was also a chance to see some of the beautiful scenery and sights along the way.

Starting out from Sheffield, the first day consisted of a 77.2 mile ride, ending in Hull – where a ferry took the team over to the Netherlands for day two.

On the second day, a 73.2 mile trip took Gary from Rotterdam to Antwerp – a five hour ride through the Netherlands, crossing over into Belgium where the third day would begin.

For the longest leg of the bike ride so far, day three began in Antwerp and cut through Belgium, ending in the Wevelgem – a town just a few miles from the France border. Totalling 93.7 miles, day three’s near seven hour ride marked the beginning of the final stretch for Gary and his squad.

From Wevelgem, Gary quickly crossed over into French territory on the fourth and final day, cycling 78 miles through Northern France to finally reach the Somme itself – just outside of Bapaume.

With this final leg of the trip complete, Gary’s epic bike ride proved to be a major success. The £3,000 raised went towards the total £23,000 raised jointly by the entire Sheffield to the Somme riders. As proud sponsors of Gary and his impressive stamina, we’d like to extend our sincere congratulations to everyone who took part in raising money for such a worthy cause.